In the January transfer window we covered an interesting claim from Spain that FC Girona are keen to sign Pau Lopez and that Manchester City would buy the player for them.

That would have seen City pay a transfer fee to Espanyol and then loan the goalkeeper to their sister club. Now the situation is slightly different.

Pau’s contract with Espanyol expires at the end of June and it’s increasingly doubtful he’s going to sign a renewal.

Clubs can now speak to Pau about joining them in the summer, and Marca report Real Betis are already in ‘very advanced negotiations’ with the 23 year old. 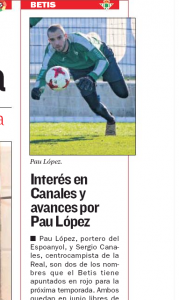 That of course means Manchester City and Girona would have to hurry and restructure their plan.

City could of course still sign Pau and loan him to Girona as part of a future investment for the football group, but the player’s opinion would obviously be key.

Girona and Betis are 9th and 10th in La Liga, although the latter is a much bigger club.

It’s unlikely Pau would accept moving to either unless he was set to be first choice.