As Hellas Verona seem to be focused on finding another deal to keep Manchester City midfielder Ivan Ilic at the club, the Italian media today brings the latest updates on the chase.

Following the the 20-year-old’s loan spell at the Serie A side, Corriere Di Verona today writes that this is an ‘uphill road’ for the club to have him for next season.

That’s because the Premier League side want to ‘monetise’ the operation with a permanent sale, and Verona can’t afford to buy him this summer.

The newspaper writes that the Italian club are actually even struggling to pay for another loan, which is said to be ‘expensive’, even though there’s no price set for now. 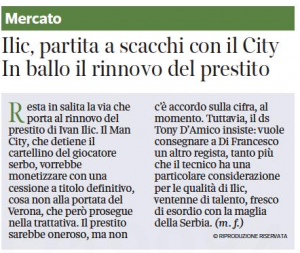 The Italian club are said to be focused on the signing, as director Tony D’Amico really wants to give manager Eusebio Di Francesco a defensive midfielder this summer.

And since the coach has a ‘particular consideration for Ilic’s qualities’, the Manchester City player is the one they want to invest on.