As soon as Sergio Agüero was allowed to leave Manchester City on a free, the rumours linking big name strikers with a move to the Etihad started appearing.

Players such as Erling Haaland and Harry Kane were among the more prominent, while claims of a late move for Dusan Vlahovic were made towards the end of the transfer market.

In the end, only Jack Grealish was bought, and no natural goalscorer arrived, leaving Pep Guardiola with a bunch of potential false nines at his disposal, such as Ferran Torres, Gabriel Jesus or even Phil Foden.

That being said, the quest for a proper striker didn’t stop when Kane was forced to stay at Tottenham, and Victor Osimhen is the new kid on the block.

With six goals in his first six games of the season, the Nigerian striker has finally started to show why Napoli spent so much on him to acquire him from Lille, and his early season performances have made him end up on a few wish lists, including Manchester City’s.

That’s according to Gazzetta dello Sport, who state ‘both Manchesters’ have taken an interest alongside Chelsea and Real Madrid.

While Napoli aren’t interested in the slightest to sell him at this moment in time, any transfer would require ‘no less than €120m’, which is ‘double what was paid two summers ago’. 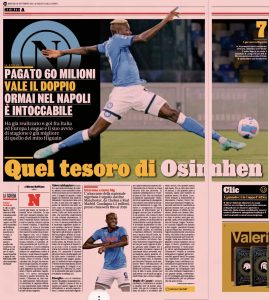 The Serie A side are expected to try and extend his 2025 contract by another year, but it’s pointed out Osimhen is ‘pleasantly surprised’ at the interest being shown in him, suggesting he could certainly be enticed if sweet nothings are whispered in his ear.

Since Manchester City were prepared to pay over £100m for Kane, it’s clear they have the money for the Nigeria international, but we’ll have to wait and see if this early attention builds into something stronger first before getting overly excited at the prospect of a new fun saga to follow.