Sent on loan from Manchester City to Girona last summer, the 24 year old didn’t have much joy in the first half of the season.

Going back to Nigeria for a Christmas break, Kayode then didn’t return to Girona on time. On January 11th it was reported ‘bureaucratic problems’ had delayed his return to Spain.

Then Mundo Deportivo suggested there was more to it.

The Spanish newspaper called it a ‘soap opera’, said it was a ‘curious’ situation and that it remained to be seen ‘how the manager handles it’.

Kayode was then strongly linked with a move to Turkey, with claims from the Turkish media he could be off to Bursaspor, then that a deal was pretty much agreed with Malatyaspor, and then that Bursaspor were still keen on the deal.

After that the Kayode story moved to France, with the Manchester City player said to be close to joining Amiens on January 18th. The Amiens move dragged on, and on January 31st the striker’s move was ‘on the verge of happening’.

Kayode would arrive from Manchester City initially on loan, with a view to a permanent move in the summer.

But something went very wrong, and Amiens have released the following statement: ‘Amiens SC is keen to comment on the situation of Nigerian international striker Larry Kayode, who was at the Stade de la Licorne last night, hoping to join the club.

All stakeholders agreed within the time frame set by the international regulations.
Due to administration reasons, the transfer of Larry Kayode has not been validated.

‘The 3 clubs concerned (Manchester City, Girona FC and Amiens SC) are currently working on the follow-up to this case, and on the possible solutions. The final decision will be taken by the football authorities, after evaluation of the file.’ 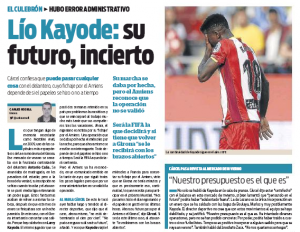 Girona’s sporting director Quique Carcel is quoted as saying: “It’s not determined one hundred percent. We spent all day negotiating and the paperwork was developed in the last hours. Now his future passes through Amiens or Girona.”

Luckily, if it all falls to pieces, and Kayode has to go back to his old loan, Carcel said Girona “will welcome him with open arms.”

That’s not great for the Manchester City player as he wasn’t getting games and needs match time ahead of the World Cup.

This is quite possibly the biggest transfer mess of the January window.