Since the start of the year, there had been a great expectation from the Portuguese media that Sporting fullback Nuno Mendes would end up in the Premier League this summer.

Manchester City had always been pointed out as the main contenders for his signing, with the Lions expecting to make the youngster their biggest sale ever.

However, nothing has happened so far, and as today reported by A Bola, Sporting are already preparing themselves to have the player in their squad for next season.

The outlet explains that at the end of the season, with impressive performances and numbers, Mendes had drawn attention from Pep Guardiola and Txiki Belgiristain, with Manchester City getting ‘ready’ to invest in his signing. 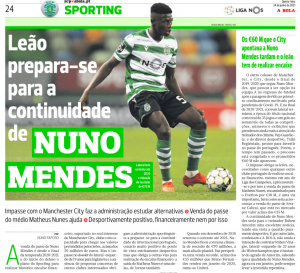 But it’s said there’s now an ‘impasse’, with no concrete offers so far, and the process being ‘frozen’.

Nuno Mendes is protected with a release clause of €70m, and Sporting’s intention would be to sell him for over €55m, which is the price paid by Manchester United to sign Bruno Fernandes in January 2020.

With the transfer now looking unlikely, the Lions are working on other sales that can help their summer budget.