Other than Benjamin Mendy, Manchester City still don’t have a natural left-back in their squad.

Both Fabian Delph and Oleksandr Zinchenko have been used there by Pep Guardiola, but the pair were originally far more attacking players used to featuring in midfield.

That’s why it’s very believable when stories come out linking Manchester City to footballers in that role like Atlético PR’s Renan Lodi.

The 20-year-old Brazilian, who played his first full season with the Série A side last year, is said to be target for the Cityzens, according to Corriere dello Sport in an article about Juventus considering him for the future. 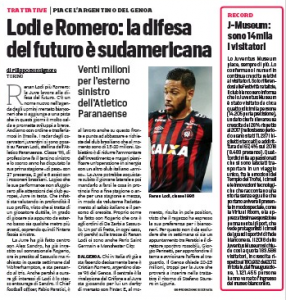 Despite signing a new contract recently, Alex Sandro previously made it clear he’d like to give the Premier League a try, but no one, since or before, came forward with a solid offer to test the Italians’ resolve.

However, it’s possible he’ll leave down the line, which is where Renan Lodi comes in.

All Corriere state is both Manchester City and Paris Saint-Germain are ‘tracking’ the 20-year-old, and it’s worth pointing out that, as things stand, there’s been nothing in Brazil about Pep Guardiola’s supposed interest in the defender.

While that isn’t always the case, if a player from the Brazilian league is wanted by a Premier League club, someone across the Atlantic tends to know, and so far they’re in the dark.