Manchester City are in negotiations for the signing of River Plate midfielder Nicolás De La Cruz, according to claims from Argentina on Friday.

Newspaper Olé says the Premier League side have opened talks for the transfer of the 22-year-old, and have been asking for ‘references’ of him in the South American country.

It’s claimed that his agent, Paco Casal, has had meetings with Manchester City, who have shown their interest in negotiating, with their limit being the player’s €22m release clause.

South American deals are always more complicated because of how player ownership is split, and this case is no different. 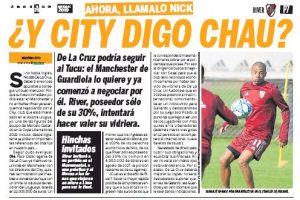 River Plate only have 30% of De La Cruz’s rights, with the other part going to his agent. The Argentine club would have to fight so they can get as much money as possible. They would do that by convincing his representative the club were crucial for the player’s exposure in the past season.

Olé says De La Cruz should be taking English classes, because it’s pretty possible that he could be leaving Argentina to move to the Premier League soon.