The future of Manchester City owned fullback Pedro Porro is once again highlighted by the Portuguese media today. This time it’s O Jogo who have a piece on the situation, and they actually bring interesting updates on how things are going.

Loaned by the Premier League side to Sporting until 2022, the player can be bought for a €8.5m fee until then, and it seems that clause is actually being triggered a lot sooner than that.

O Jogo claims the Lions plan to sign Porro permanently at the end of the season, and Manchester City now try to ‘explore’ the little options they have.

Pep Guardiola’s side already consider the player as ‘lost’, and the only way they can take any advantage of this deal is to negotiate their percentage on a future transfer. 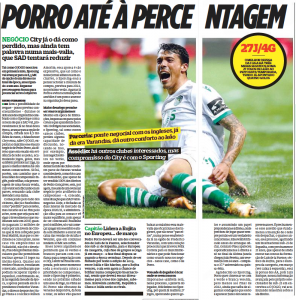 It seems strange that those details haven’t been made concrete in the loan contract. Still, the newspaper makes it very clear.

With Sporting and Manchester City being partners, these should be friendly negotiations, but each side will try to defend their interests.

O Jogo writes that a few clubs have been interested in the 21-year-old and even contacted his representatives. That’s why Sporting want to be quick making his move permanent, as even though Manchester City have the compromise of selling him to the Lisbon side, the player must be on board with the operation as well.

Porro, however, is said to be happy in Portugal, and will stay at least until 2022.