Anderlecht are currently 13th out of 16 in Belgium’s top division.

Their Manchester City flavoured revolution isn’t exactly getting off to the best start. Taking Vincent Kompany, coach Simon Davies, and Philippe Sandler, and also having Craig Bellamy as part of the backroom staff, there was a lot of hope that some of City’s success could rub off on Anderlecht.

Pep Guardiola is of course the man behind much of the glory at the Etihad, and there was an assumption Kompany would be influenced by the Manchester City style, and that’s the way he’d approach his first job in management, working alongside Davies.

Out of seven matches so far they’ve won one, lost four and drawn two.

A 2-1 home loss to Antwerp at the weekend has led to doubt building around the Belgian media.

Monday’s edition of Het Nieuwsblad covers the loss and the poor start, and, like HLN, also that Kompany is thought to have given a ‘sledgehammer’ speech in the dressing room after the match. 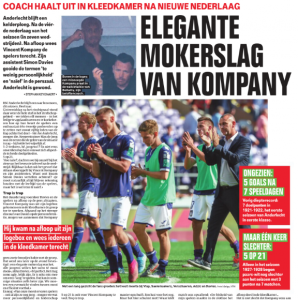 There are ‘cracks’ appearing in the project already, and Davies is quoted as saying: “The boys sometimes want to do it too well. Too perfect. Sometimes it can be ugly. There is nothing wrong with playing ‘long’. That can even be better in some situations. We have to find a balance between beautiful and efficient football.”

It would appear that perhaps too much inspiration is being taken from Guardiola and Manchester City, and that the players currently available aren’t able to make the football style work… not yet anyway.