Several headlines can be found in the Italian media this week talking about Manchester City’s interest in Sassuolo midfielder Manuel Locatelli.

They all credit Tuttosport for the information, claiming that Pep Guardiola’s side should soon make a move for the 23-year-old’s arrival.

Now after checking the newspaper, we can see that Manchester City are indeed linked to the player, although the claims are not strong as they seem.

Tuttosport’s story is actually about interest from Juventus, who are keen on adding a third big name to their midfield. 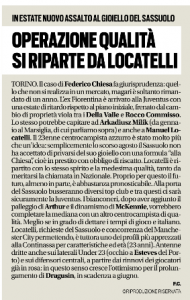 Now there are two factors which could make things harder for Juventus. One is the demands made by Sassuolo, and the second is the competition from Manchester City.

There are no details on how strong the Premier League side would move for the player, even though the links have been in the Italian media for a while now.

Back in January, Locatelli’s agent confirmed that Manchester City are one of the clubs who are monitoring the player. At that time, it was claimed Sassuolo want €40m for his transfer.