The midfielder is under contract at the Etihad until 2023, and his importance in Pep Guardiola’s plans would suggest he would be content with his situation in the north of England.

However, Sport/Foot on Wednesday throw some doubt over all this, reporting that De Bruyne is currently ‘taking his time in giving his employer guarantees’, which they would like ahead of the whole CAS/Champions League mess.

It all seems to come from the player’s entourage, as the magazine explain they are aware his ‘reputation has never been this high’, and they’ve decided to ‘bide their time’. 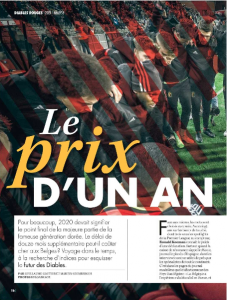 Sport/Foot make one thing very clear, and that’s the fact that the ‘absence of communication is a way of communicating in itself’, and if Manchester City do miss out on the Champions League for the next two years, they expect him to try and leave as they can’t see him ‘writing off’ his continental ambitions at the age of 28.

Of course, if he does decide to leave, there will be very few clubs capable of buying him, so he might end up staying at the Etihad anyway, but it would be reluctantly, by the sound of things.