Manchester City are interested in Rafael Leao, according to Duncan Castles, writing for Arab News.

Before you click away, we are only relaying this as Record in Portugal have picked up on it, and added their own information to it, adding a bit more weight to Monday’s original claims.

Pep Guardiola’s side have apparently been scouting the 18-year-old forward ‘with increased insistence’ recently, and the Portuguese newspaper claim the Premier League leaders are ‘prepared to offer €25m’ next summer.

A large part of Record’s article is dedicated to relaying what Arab News were reporting, which is that Manchester City see Leao as a player with a similar potential to Kylian Mbappé, with their Spanish manager thinking about integrating him into the team in a similar manner to success story Gabriel Jesus. 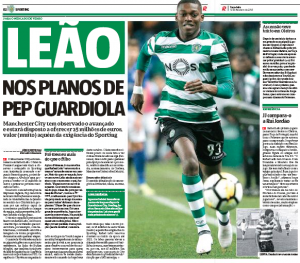 With two senior appearances already to his name this season, and having trained with Sporting CP’s first-team since October, the young striker is progressing fast, and this could speed up the whole thing.

Back to their own information, Record make it clear that Manchester City would find it hard to get a deal done at €25m, with Sporting CP, in true Sporting CP fashion, want a lot more.

Having renewed at the beginning of the season, Leao’s release clause currently stands at €45m, but the Portuguese club want to up that to €60m (which contradicts Arab News’ claims of it being already done), and we all know how much Bruno de Carvalho likes pushing clubs to their limit when it comes to paying for his stars/starlets.