As is customary these days, here is your daily Jorginho to Manchester City update, courtesy of Corriere dello Sport.

Thursday saw more and more reports discuss the possibility of Oleksandr Zinchenko being agreed in the deal, and the Italian newspaper on Friday report that’s exactly what’s been offered.

Manchester City are said to have made a €53m bid, and have ‘left the door open’ to include the Ukrainian starlet in the deal, but Aurelio de Laurentiis isn’t interested.

The Napoli president is said to only want the money, and it’s ‘no secret’ they’re asking for €60m for the midfielder; an amount they’re reluctant to change. 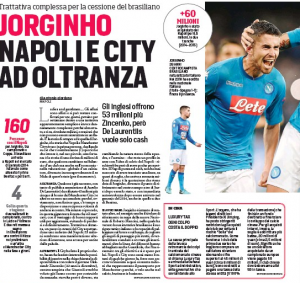 This leaves the two clubs ‘much less distant than a few days ago’, but there’s still some work to be done in the near future before an agreement is reached.

Napoli want the €60m, and it seems Manchester City might have to go that high if they are to get the midfielder.

As Corriere state, ‘after all, in football, business is business’.