With Roma now struggling for Champions League qualification, a lot of questions are being asked about the future of a number of their players.

Edin Dzeko, Kostas Manolas and Cengiz Ünder are three of the main ones, and until he signs a new contract, Nicolo Zaniolo will remain near that list as well.

As has been reported a number of times in the past and reminded by Gazzetta dello Sport on Friday, three clubs in particular, including Manchester City, remain interested in his services.

Joined by Real Madrid and Juventus, Pep Guardiola’s side would be ‘prepared’ to offer €50m to acquire the 19-year-old who took European football by storm this year under Eusebio di Francesco, scoring six goals in 30 appearances, including two against Porto in the Champions League first knockout round. 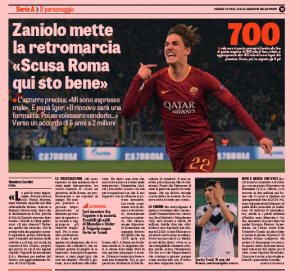 With renewal talks reportedly ongoing, Zaniolo will be aware that teams such as Manchester City will be able to offer him more on the wage side of things than Roma.

However, with the Euros 2020 looming, the youngster will need to be mindful about how much football he would get at the Etihad, or with Juventus and Real Madrid, as he needs to play to continue his progression.

Gut feeling? He’ll stay at Roma, even without Champions League football, but we all know money talks.