Houssem Aouar impressed for Lyon against Manchester City in the Champions League group stage fixture of the 2018/19 season.

L’Equipe claim there was a concrete approach from the Premier League winners, led by Pep Guardiola, last summer.

However, the 21-year-old decided to continue with the Ligue 1 side after being convinced by their sporting director Juninho.

The ‘door is open’ for the Frenchman to change clubs this summer and Lyon leaders are convinced they cannot retain the player for one more season, which is why they have ‘laid the groundwork’ for his departure ‘for several months’.

The 2020 summer transfer window has been postponed because the leagues in other countries are yet to be completed. This would delay Lyon’s signings as their plan largely depends on the sales of the midfielder and Moussa Dembélé.

Guardiola’s side are once again mentioned as the newspaper states City and Juventus have ‘positioned themselves’ to sign Aouar. However, the two clubs are yet to start negotiations with Lyon. 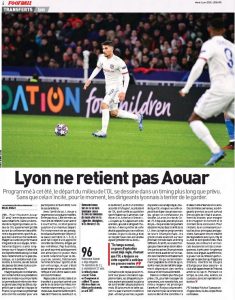 Rudi Garcia’s star had long preferred a move to the Etihad, but their ban from European competition for the next two seasons has made him to reconsider.

The Old Lady, on the other hand, are advancing behind the scenes and trying to seduce the France U21 international to join them.

City are certainly in the picture for Aouar, but signing him could largely depend on whether or not they will play in next season’s European competition.