Manchester City managed to turn things around against Schalke on Wednesday evening, turning a 2-1 deficit into a 3-2 victory and making Pep Guardiola’s side look good for progression to the next round of the Champions League.

Schalke are currently 14th in the Bundesliga and again going through a low period on their seesaw of recent seasons. The early scenes at the Veltins Arena gave home fans some hope of a very unlikely good result, but City went about putting things right.

A wonderful free kick from Leroy Sane against his former club levelled things and then Raheem Sterling got the winner, taking the 24 year old England international to a brilliant 15 goals so far this season.

German newspaper Bild weren’t impressed, and that’s no great surprise. They weren’t too impressed with the performance of Tottenham players after they beat Borussia Dortmund 3-0 at Wembley, and also thought Bayern Munich were much the better side at Anfield this week. 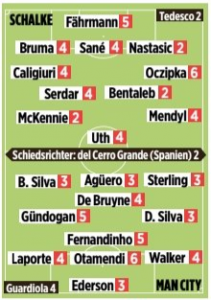 Nicolas Otamendi got his 6 after giving away a penalty and being sent off, so, regardless of the VAR arguments, that can’t be argued with too much.

But the rest seem harsh, with not one Manchester City player deemed better than average, and most considered worse.

Interestingly, Vincent Kompany came on in the 70th minute and was given a 4, but Leroy Sane came on soon afterwards, scored a hugely important and wonderful goal, yet wasn’t deemed to have played enough, or made enough impact, to get a grade.