Thierry Ambrose moved to Auxerre’s academy from AS Gresivaudan in 2006 and spent seven seasons with the French club’s youth system before joining Manchester City in 2013.

The 21-year-old has failed to make his way into the first team and the Premier League winners allowed him to go out on loan to get first team experience.

Ambrose impressed for the Eredivisie outfit, scoring 10 goals and registering four assists in 30 league appearances. Breda scored only 41 goals in the league and the Frenchman had a role in 34 percent of the goals scored during the last campaign.

According to France Football, the forward’s display for Breda has not gone unnoticed. He is now attracting interest from ‘several teams from Europe’. 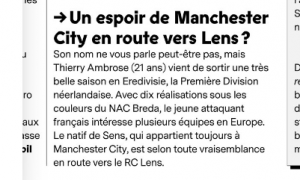 The report claims Ambrose is ‘in all likelihood’ to make a move to Ligue 2, with RC Lens believed to be his next destination.