Pedro Porro is finally back at Sporting. After missing a couple of months due to injuries, the fullback is once again showing his big potential at the Lisbon side, getting one goal and two assists in his two games after his comeback.

Newspaper Record writes about him, once again pointing out that the Lions will soon trigger the buying option to sign him permanently from Manchester City.

Sporting have the right to buy the fullback for €8.5m, and will trigger that as soon as they have the conditions to do so. It shouldn’t take long, as his spell expires in the summer.

The Lions even know they could make a quick profit with the player, as according to the story, the likes of Atletico Madrid and Real Madrid are already interested in him. 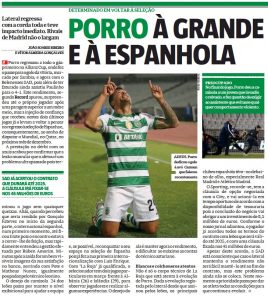 Now what’s interesting in this story is that Sporting and Manchester City are set to face each other in the Champions League in a couple of weeks, and according to Record, Porro is already thinking of proving himself to manager Pep Guardiola.

The newspaper recalls that the fullback ‘never had the chance of wearing the Citizens’ shirt in official matches’. Now he ‘wants to show Guardiola that he is now registering the evolution that led the Catalan coach to endorse his signing in 2019’.

Even if Guardiola is impressed with Porro, there isn’t a lot he can do, as the player even agreed to a contract with Sporting for his permanent move this summer.