Home Europe The Man City player who turned up for training in pyjamas –...
SHARE

With Vincent Kompany departing Manchester City this summer, the Citizens were left with something of a problem to solve.

While the centre of their defence is by no means weak, Kompany’s exit left a hole that will have to be filled sooner rather than later.

A new signing never arrived in the summer transfer window but, with Aymeric Laporte’s injury in the early stages of this season, that may change in January.

Should it not, City may elect to look to the youth ranks, and one man who may benefit is Philippe Sandler.

The Dutchman joined in 2018 as part of their efforts to hoover up the best talent around the globe, and there’s every hope at the Eithad he will be a first-team star in the future.

Former teammate Dirk Marcellis certainly has no doubts about his teammate’s qualities, saying his best is what he does off the pitch.

“One time, he appeared on the training complex in his pyjamas without being seen. Or in shorts, while it was freezing,” he told Het Laatste Nieuws.

“(He’s a) golden boy. A clown, in the good sense of the word. Someone who has a pleasant sense of humour.

“He creates an excellent atmosphere in the dressing room. At the same time, he has a strong personality. Philippe is a leader.”

If Sandler is to succeed at Manchester City, he will have to find a way to adapt and fit into the system and style Pep Guardiola prefers.

That will mean filling the role of the ball-playing centre back the City manager loves and has practically made his trademark during his managerial career.

John van ‘t Schip, one of the 22-year-old’s former coaches, says Sandler will have no issue with that, predicting a bright future for his former protégé.

“Philippe is great at the ball,” he added. 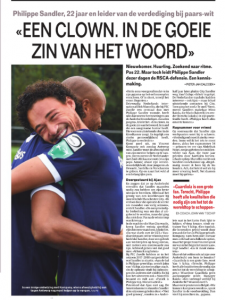 “He finds solutions in the build-up that others cannot find. And he can also implement it.” Philippe is physically top. What an athlete.”

“I tipped him (to make a big move). The top Dutch clubs were interested – including Ajax – but I had excellent contacts at City. Then it went fast.”

“Guardiola is a big fan, and rightly so, Philippe has all the qualities needed to make it to the top of the game.”