Manchester City’s Angeliño spent the second half of the last season on loan at RB Leipzig after struggling for regular playing time in the first six months of his second spell at Etihad.

Earlier this month, the left-back returned to Leipzig after they agreed another loan deal with the Citizens for the Spain international.

The 23-year-old impressed during his time in Germany, and that had caught Barcelona’s attention.

According to SportBild, the Catalan club couldn’t sign the defender due to lack of funds. The Spain international has now admitted he wasn’t in favour of joining Ronald Koeman’s side this summer.

“It’s great that one of the biggest clubs in the world wanted me. But in my mind it was always clear: I want to go to RB Leipzig and not to another club, no matter which club that was,” Angeliño told SportBild when asked about Barca’s interest.

“Leipzig suits me, the club’s high goals fascinate me, I am just as hungry as the club,”

The former PSV Eindhoven man explained in detail about Leipzig manager Julian Nagelsmann’s role in his decision to extend his temporary stay with the Bundesliga side.

“The coach is one of the main reasons for me. I was enthusiastic about his idea and how he played from the start,” he added.

“We really have a great relationship with each other. He often told me that he wanted to keep me, that I was an important part of the team. As a player, this simply gives you a good feeling when you are really needed.

“I felt that connection throughout the club from day one. But my teammates also made it easy for me to get my best performance straight away.”

“…I never doubted I could stay in Leipzig. They put a lot of work into making everything possible.

“I’m glad the clubs were able to come to an agreement, because now I’m back at the club where I feel good and where I can get along well with everyone. Because of this, it was an easy decision to make this summer.”

Nagelsmann’s side retain an option to make the fullback’s transfer permanent, if he makes 12 appearances next season, out of which five of them should come from the second half of this campaign.

Angeliño has now revealed his long-term future plans includes extending his stay at Leipzig beyond his current loan spell. 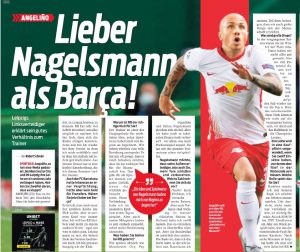 “I don’t worry about that, I always want to play. The prospect of not just being loaned out is important to me,” the player concluded.

“When I played at PSV Eindhoven for a year in a row in the 2018/19 season, that was the decisive push for my career. After six months in Leipzig, I am now hoping [to stay] for many years at RB Leipzig.”

Everton ‘take lead’ for defender – ‘Hold the rope’ for transfer, ‘fighting’ with competition

Everton ‘take lead’ for defender – ‘Hold the rope’ for transfer,...