While Manchester City are all about the big money signings, there is some focus on youth under Pep Guardiola as well.

City want to recreate the success of Barcelona’s La Masia and have invested heavily in the youth setup to make it happen.

One of the players who is a big part of that is youngster Eric Garcia. The 18-year-old arrived at the club from Barca in 2017 and is highly rated at the Etihad, having already enjoyed his first-team debut against Leicester in the Carabao Cup.

He’s been shining in the U19 European Championships group stages and says it was a last-minute decision for him to go the tournament.

“The Federation and City spoke so that I could come to the European Championship”, he told AS.

“The Federation and the City talked to see if I could go. In the end, we talked to the club and made the decision that going was the best, playing a European Championship with the National Team is a very good experience.” 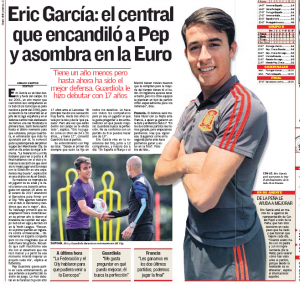 Garcia is hoping to use this tournament to continue his development and further his hopes of breaking into the City first team in future.

That’s likely to happen under Guardiola, a manager known for his willingness to give young talent their chances and develop them into world-class stars.

That was part of the reason Garcia swapped the Nou Camp for Manchester and he says that Guardiola is exactly the perfectionist that you expect him to be, something he’s keen to take advantage of.

“My agents talked to the club, we valued it and we decided it was the best,” he adds.

“I remember the first game in England against Newcastle … Obviously, in Spain, I competed but I did not imagine that the jump was so great.”

“I remember that I suffered a lot that day with the striker that I had to mark and from that moment I tried to improve a little every day,

“From the first day whenever I go up, he [Guardiola] looks at all the details. He does it with all the teammates but I am a player who likes to ask coaches how I can improve. Guardiola seeks perfection. It doesn’t settle for a match of 8 if you can make one of 10 ”.