Porto are evaluating the chances of signing Eliaquim Mangala back from Manchester City this summer, according to the Portuguese press today.

Newspaper O Jogo says that with a couple of defenders leaving the Dragons this month, they are going after a well known player to add to the squad.

It’s said that Porto would have no problems to get to a deal with Manchester City, since the English side have already given up on expecting a big financial return from a Mangala sale.

So there would be only two issues: the first being his salary, since he would have to take a pay cut to make the move, and the second are his fitness conditions, since he missed most of the 2018-19 campaign due to injuries. 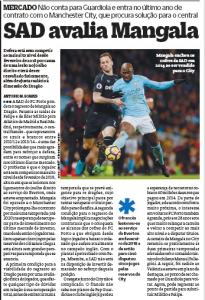 O Jogo’s sources have told them that the player would be interested in returning to Porto, since he would be keen on ‘relaunching’ his career after such a hard time in England.

Mangala failed to make one appearance for the first-team under Pep Guardiola this season, featuring just five time in Premier League 2 with the reserves instead.