Last week, AS reported that Barcelona have submitted a €10m bid to sign Eric García.

‘Second offer’ is splashed in bold on the front page of the Catalan newspaper, and it’s now stated Barca will present an improved proposal this week.

The 19-year-old remains a ‘great objective’ for Ronald Koeman’s side, and has already given his approval over a return to the Spanish club. However, the agreement between the two clubs is ‘missing’.

After seeing their first proposal being turned down by the Citizens, Barcelona’s second offer will not exceed €15m, even though they are aware Pep Guardiola’s side continue to demand €18m or more for the defender.

In no case, according to the claims, will the Blaugrana ‘go up to a figure of about €20m’.

Mundo states, ‘at Barça, they continue to hope to reach a meeting point with the City’.

Should they fail to do so, Barcelona prefer to wait until January and agree a pre-contract with the Spain international, so that he can arrive at Camp Nou on a free transfer next summer.

The possibility of staying at the Etihad for one more year is something that doesn’t ‘displease’ the player because he’s aware Guardiola rates him highly. 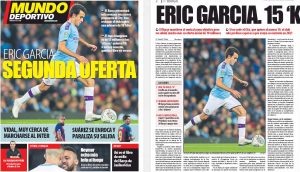 Pep believes his compatriot can be useful for the new season, even if he has decided against signing a new deal at the club.

It’s now down to City whether to accept Barca’s second offer or risk losing García for nothing a year later.