There’s some confidence in Portugal that Nicolas Otamendi will go back to Porto, regardless of the competition there is for him.

The defender is expected to leave Manchester City in the coming weeks, since Pep Guardiola doesn’t have a place for him in the squad.

Correio da Manhã brings a piece about it today. They take a few claims from Argentina to say the player is trying to get himself free of his contract with the Premier League side, which runs until 2022.

Then they write that going back to Porto would be his ‘priority’, regardless of the interest from Inter Milan to take him to Italy. 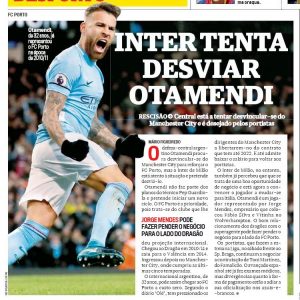 It’s said the defender would like to go back to the club which gave him ‘international projection’.

For that to happen, Porto would use the good relationship they have with his agent, Jorge Mendes. The representative already did some big business with the club this summer by sending Fábio Silva and Vitinha to Wolverhampton Wanderers.

In case it’s true Otamendi is trying to be released by Manchester City, then Porto would only need to make an effort to afford his salary.