Perhaps the international break came at a good time for Bernardo Silva, who’s recently been charged by the FA over a tweet sent to Manchester City teammate Benjamin Mendy.

The case has obviously made some noise in Portugal, where manager Fernando Santos referred to it as ‘completely absurd’ in a press conference last week.

Now as Silva prepares for their games against Luxembourg and Ukraine, he’s getting some time to distract himself from the controversy a little. That’s what newspaper O Jogo writes about today.

They say the Manchester City player can ‘breathe in relief’, with the team concentrating on not letting him ‘lose the mood’. It’s claimed that in the first training sessions, he’s been able to ‘calm down and even smile’. 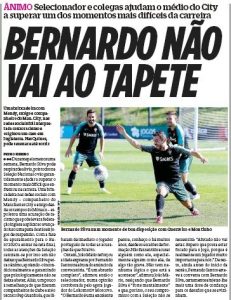 Former West Ham player João Mário gave a press conference on Tuesday, and was asked about Silva’s situation. Just like Fernando Santos, he defended his teammate.

“Bernardo is an excellent person, I know him for many years, since the youth squads. It makes no sense to accuse someone like him, especially someone like him, of something so serious. There is no logic to what is happening.

“I hope he can be focused on the game because he’s really a very important player for us.”

O Jogo also reports that manager Fernando Santos had a conversation to ‘inject courage’ in the Manchester City star before the training sessions.