The Chilean media seem to be turning on Claudio Bravo, although not in a big way.

For years Bravo has given kicks to the media in his home country, over not a lot, seemingly just because he could, and now they have the chance to go crazy against him, they’re showing some restraint.

Manchester City’s reserve goalkeeper refused his call-up to the Chile squad this time, because he’s annoyed they haven’t appointed the goalkeeper coach chosen by him. Bravo offered to pay for his own coach, but the Chile stance has been that no player can pick the squad’s staff.

Bravo then arrived in Chile, with Manchester City giving him time off, and touched down at the airport dressed in black, with sunglasses on and a big black hat, it was quite the entrance. 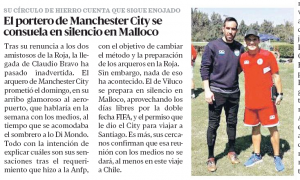 At that point Bravo told the local media he’d speak to them this week and explain things further. He hasn’t, and La Cuarta say the goalkeeper ‘consoles himself in silence’.

Meanwhile, the Chile squad are getting on with things, everyone seems over the dramas of the past, and Bravo’s decision is looking less wise by the day.