Home Europe Man City ‘one step ahead’ of other suitors for signing – Player...
SHARE

Lionel Messi has informed Barcelona he wants out of the club and multiple reports from South America on Wednesday placed Manchester City in the front row to sign him.

Sport on Thursday explain City, Manchester United, Paris Saint-Germain and Inter Milan have the ‘most options’ to secure the 33-year-old’s services, but the Citizens are ‘one step ahead’.

It’s claimed the forward is ‘determined’ to leave the Camp Nou and there is ‘no going back’ on his decision.

There are ‘several factors’ that have contributed to the star’s ‘tiredness’, and he’s now looking for a winning project which must include competing to win the Champions League.

Messi is uncomfortable with new Barca manager Ronald Koeman, and is unhappy with the manner in which the club have made a decision to sell his close friends, Luis Suárez and Arturo Vidal.

Messi’s first option is Manchester City and his entourage are accelerating to find an agreement with the Premier League side. According to the report, the English club are ‘ahead of other clubs’ in the race to land the six-time Ballon d’Or winner.

The South American’s best years were under Pep Guardiola, and a move to City will see him reunite with his former manager, as well as national teammate Sergio Agüero.

Barca have so far not received any formal offer, which Sport believe is normal, because they are ‘waiting for how the contractual situation will be resolved’.

Messi’s lawyers believe he can leave for free this summer, but Barcelona are stating that option could only be taken if he had communicated the decision before June 1st.

For now, Sport state Messi is expected to join Barcelona’s training sessions from next Monday ‘so as not to give the club legal tools before a judicial process’. 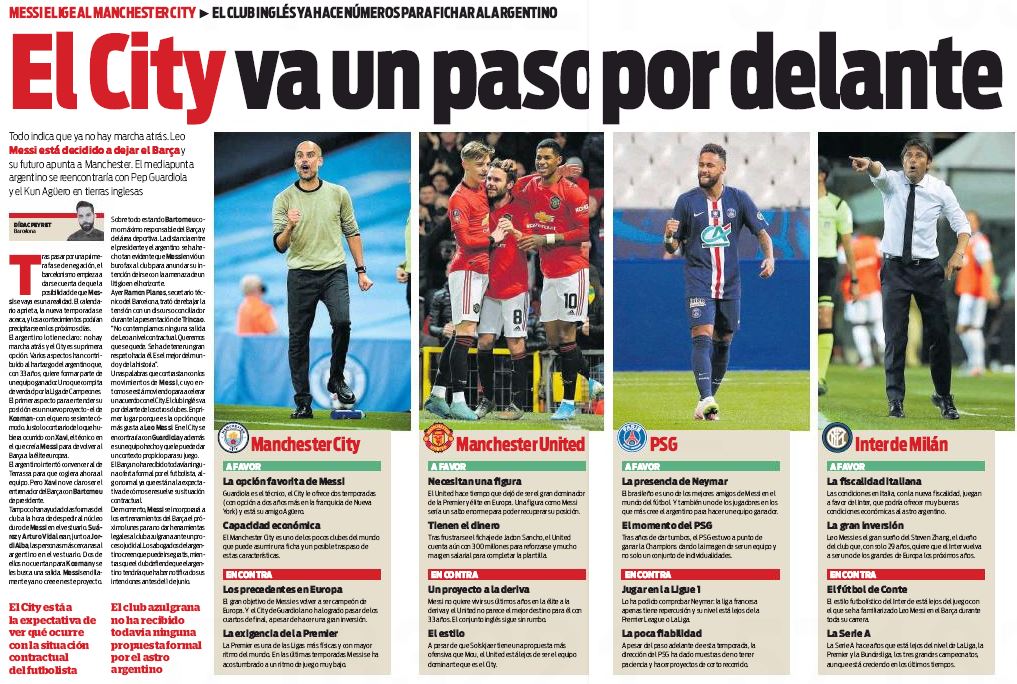 ‘City on pole’ reads a headline in today’s Marca.

The newspaper explains City have ‘powerful arguments’ to seduce Messi to join them, and this, again, is all about having Guardiola and Agüero at the club.

Marca further add the ‘first contacts’ between Messi and Pep’s side have already taken place. 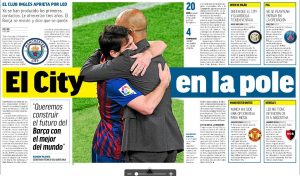 Barcelona, meanwhile, are ‘reluctant to accept’ they will have part ways with the club’s best ever player.

To be frank, there’s a lot of repetition going on in the Spanish, Argentine and English media, with newspapers rushing to give their take on a developing situation.