Lisbon outlets continue to follow this case very close, since Manchester City are expected to buy the winger and loan him out to Sporting.

A Bola writes today that Velez Sarsfield continue to work hard to keep the player, trying to find a deal with his agent to increase his release clause from €16m to €25m.

But according to the newspaper, Almada is not signing a new deal, and should leave for €16m. They say there’s a Manchester City official in Buenos Aires, and the transfer should be done in the next few days. 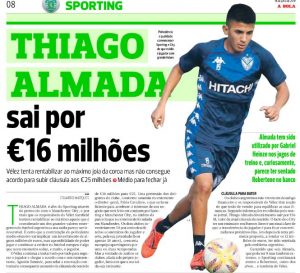 It’s claimed that after the Premier League side buy him, he should spend ‘one or two’ seasons developing at Sporting, since the clubs now have a partnership for it.

Although it’s more likely that this move to Sporting will be on a loan deal, we’ll keep an eye on the reports, because it’s been previously claimed that the Lions may actually get him permanently and give Manchester City a clause to buy back.