Even though Portuguese newspapers are used to covering claims from the English media, Record does something quite unusual today by putting one of these stories on their front page.

They take the article from The Sun stating Manchester City have held a meeting with Benfica for the signing of João Félix and just run with it.

However, the Portuguese outlet do have something to add to the English report, claiming the Premier League champions still aren’t any closer to signing the wonderkid.

The outlet believe this reported meeting took place, but all it was was ‘just another attempt’ by the Cityzens to lower Benfica’s asking price for Félix, with the Eagles standing strong, demanding the €120m release clause to be paid. 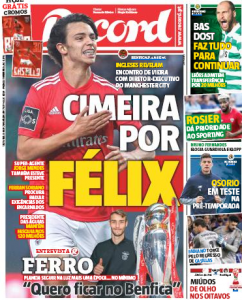 Record claim that Manchester City ‘aren’t prepared’ to reach that amount, and with several people from Benfica saying he’s not leaving for anything less, everything is at an impasse.

The newspaper adds that because Benfica are not depending on sales this summers to balance their books, their intention is to raise Félix’ release clause to €200m, making it even more difficult for clubs to sign their prized jewel.