Manchester City are one of the ‘most interested’ clubs in signing Nélson Semedo, claims Mundo Deportivo.

The Barcelona right-back is also drawing interest from Juventus, Inter Milan and Paris Saint-Germian, and the La Liga winners have identified Ajax’s Sergiño Dest as a target to replace Semedo.

Another report from the same outlet explains the Premier League winners are ready to offer João Cancelo as part of the deal for the Portugal international.

Pep Guardiola’s side, however, are expected to face a tough battle to complete this player-plus-cash operation.

That’s because Barca sources admit Semedo is ‘close to entering a barter’ with Juve for Miralem Pjanić and in recent days, the Old Lady has put ‘more meat on the grill’ to take the fullback.

During the negotiations between the Spanish champions and the Turin club for Pjanić, the defender’s name was brought up.

Semedo’s agent Jorge Mendes shares a good relation with Juventus and the representative knows the Serie A winners and Barca are ‘eager to find an agreement’ for his client. 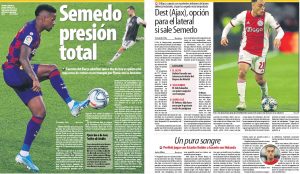