Home Europe Manchester City ‘most dangerous’ in transfer race – Have been on the...
SHARE

Thiago Almada made his debut for Vélez Sarsfield in 2018 and since then, he has made over 40 appearances, scoring nine goals and registering four assists in the process.

AS now explains Manchester City and Atlético Madrid are looking at the 18-year-old.

Andrea Berta, the La Liga club’s sporting director, travelled to Argentina a few months ago to watch the forward live in action.

However, those in charge at Vélez are stating they have not been approached by any club for the youngster.

AS claims Atlético will face competition, mainly from the Premier League and the ‘most dangerous’ club is Manchester City. According to the report, Pep Guardiola’s side have followed Almada ‘closely’ for several months. 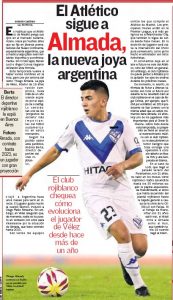 Simeone’s intervention could be key for Atlético to beat City in the race to sign the player, who is considered a ‘jewel’ of Argentina.

He can play anywhere in the front three and also behind the striker, and has a contract with Vélez until 2023.

Almada is a player with ‘great projection’ and it remains to be seen who between Atlético and City would manage to secure his signature.