We know every Manchester City fan out there loves Yangel Herrera, which is why we are delighted to bring you the latest on the Venezuelan’s future.

The 21-year-old spent the second half of last season at Huesca in Spain, a transfer that caused a bit of an issue with the La Liga club despite them agreeing to go through with it, and the defensive midfielder could end up returning to the same league in the coming season.

According to Grada3, negotiations between Manchester City and Granada are underway, with a transfer potentially being agreed ‘in the coming days’.

The newly promoted side are hoping the player’s knowledge of the league and his ability to create chances will help them in their quest to stay up, but there’s a slight issue.

Granada already have four non-EU players in their squad, and with a limit of three, they will need a couple to leave to accommodate Herrera, with Nico Aguirre and Sergio Peña touted to be the likely sacrifices.

As things stand, the operation ‘still isn’t closed’, but everything is ‘heading in the right direction’, even if nothing has filtered regarding the nature of the transfer (whether it’s a loan or permanent), and Grada3 don’t think that detail will be revealed until the contract has been signed. 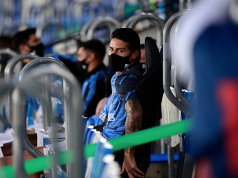 Colombian media give exclusive, and graphic, info on injury to Everton’s James Rodriguez

“We would have loved to see a green and white stand” – Media sad at lack of ‘mythical’ Celtic fans, wanted to hear ‘Scottish...

Player rues missing out on Liverpool move, Reds ‘wanted’ him – Was also ‘followed closely’ by Tottenham

Colombian media give exclusive, and graphic, info on injury to Everton’s...

“We would have loved to see a green and white stand”...

Player rues missing out on Liverpool move, Reds ‘wanted’ him –...