Manchester City and Manchester United are put against each other in the battle for two Serie A players.

As newspaper Tuttosport reports Juventus’ chase for the Fiorentina midfielder Federico Chiesa, they claim that the Old Lady should have competition from both Premier League clubs.

That’s why club director Fabio Paratici is looking to make some early efforts and guarantee the signing before the Manchester sides get any chance.

But to have the money to spend on Chiesa, Juve need to make some cash in the summer. That’s why they are planning to sell Douglas Costa. 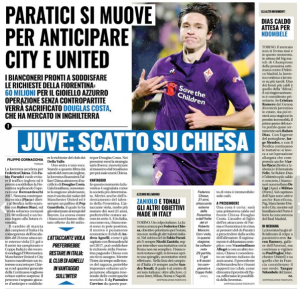 Tuttosport claims that the Brazilian is still on United’s radar, and is always a possibility for Manchester City, as Pep Guardiola has already worked with the player at Bayern Munich.

Juventus have reportedly rejected an offer of €80m for Costa last summer, but this time they will simply try to make as much money as they can, then take this cash to afford Chiesa’s transfer.

Selling Costa to either Manchester club would therefore be rather convenient for Juventus, and perhaps Tuttosport are being a little optimistic.