With the English press reporting Manchester City’s interest in signing the Benfica defender Ruben Dias this week, we could only wait for the reaction from the Portuguese press.

Now this response comes from several local newspapers today, with all of them believing that Pep Guardiola’s side could indeed sign the 22-year-old in 2020.

A Bola is one of them, and they bring a few arguments saying why Manchester City are one of the contenders.

Along with Manchester United and Atletico Madrid, the club are said to have the money needed, besides playing in an attractive league, and being in Jorge Mendes’ circle. 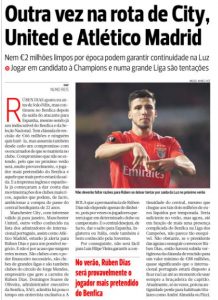 These factors could all make a transfer easier, with Benfica not having much to do in case the player chooses not to sign a new contract and move abroad, especially in case his €66m release clause is triggered.

But they also make it clear that Benfica president Luis Felipe Vieira is planning to increase Dias’ release clause, as he’s recently scheduled a meeting with agent Jorge Mendes.

So the player’s price tag could soon go up to €88m.