So far, we’ve had Arsenal and Chelsea reportedly interested in Nicolo Zaniolo, and now we have Manchester City.

According to Corriere dello Sport on Tuesday, the Premier League leaders have now joined the race to try and sign the Roma starlet, although they will have a tough task on their hands.

As has been repeated many times in the Italian press, the Serie A club have been trying to get their new prized asset to renew his deal, and that appears to be all sorted, with the 19-year-old expected to put pen to paper at the end of the season.

However, Manchester City have been unable to ignore all the attention surrounding Zaniolo, meaning their ears have pricked up and they are now prepared to ‘invest on a gamble’. 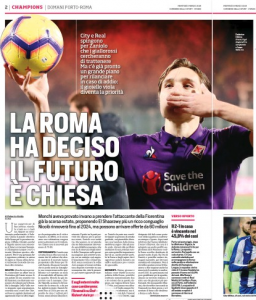 Corriere point out that judging by the midfielder’s recent performances, it would be a rather safe bet, but convincing him to leave Roma could be tricky.

Zaniolo is determined to not skip any steps in his development, meaning an extended stay at his current club is his priority, aware he’ll get plenty of first-team football there and play in Europe every year.

Real Madrid and Juventus are also hovering with Manchester City, but the same applies for them.

Pep Guardiola might have to pull out all the stops if they want to get this one done, and even then, it might be asking for too much.

This year, at least.