Over the weekend, Record in Portugal reported Manchester City are planning to ‘seduce’ Joao Felix by offering a ‘dream contract’ worth €30m for a period of five years.

On Monday, the same newspaper reported Benfica have accepted they will not be able to retain the 19-year-old after the Premier League winners submitted the €6m-a-year contract offer.

Spanish newspaper AS once again relays that Pep Guardiola’s side are ‘interested’ in the Portugal international, along with Juventus and Atletico Madrid.

Los Rojiblancos are aware they cannot match the salary the English champions and the Turin club are willing to offer the youngster, which is why convincing the player to join them remains essential.

Diego Simeone’s side view Felix as the ‘main objective’ of the summer transfer window, but he wasn’t initially convinced.

However, the teenager’s agent Jorge Mendes has made his client aware the La Liga side are one of the biggest clubs in Europe, who have recently won the Europa League and made it to the Champions League final.

The Spanish club’s leaders are aware the Benfica star is still not a finished product and can go on to develop under the guidance of Simeone, if he signs for them. 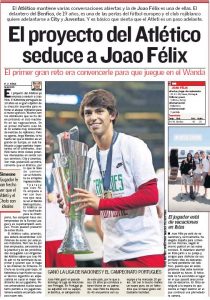 AS claim Atletico are willing to pay Benfica the attacker’s €120m release clause as they want to beat Manchester City and Juventus to Felix’s signing.

Time should tell if City will make another move to convince Felix to join them over other clubs or will Atletico be successful in securing his services. 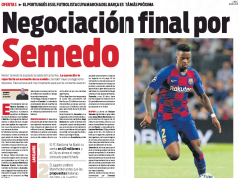 “I think he regrets this decision” – Claim Tottenham made ‘serious’ offer for player, summer move on agenda

“I think he regrets this decision” – Claim Tottenham made ‘serious’...