Manchester United were successful in overcoming competition from Manchester City in signing Alexis Sánchez from Arsenal in 2018.

The forward struggled during his time at Old Trafford and was sent out on loan to Inter Milan last summer. If reports coming out of England are to be believed, the Chilean has no future with the Red Devils.

Three days ago, Inter CEO Giuseppe Marotta hailed the former Gunners star as an “important player” and admitted his side will “evaluate” signing the 31-year-old.

Chilean newspaper La Cuarta has an original report on Sánchez and they state City ‘again probe’ for the attacker. He’s an ‘old love’ of the Citizens.

It’s claimed City have returned to ‘make contact’ with his entourage to find out the conditions needed to take him away from Ole Gunnar Solskjaer’s side, ‘in the midst of negotiations with Inter Milan’.

Sánchez played under the orders of Pep Guardiola when the two were at Barcelona, and the former has always pleased the Etihad club’s manager.

La Cuarta add the conditions are excellent to conclude a deal this summer. City will have a transfer budget of $190m (€166m), and United are ready to let the player leave for $22m (€19.2m). 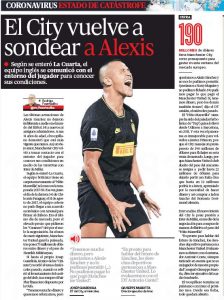 It’s claimed the ‘new interest of City’ has put pressure on Antonio Conte’s side. Sánchez’s loan deal at San Siro is until the start of August and ‘everything will be open’ after his temporary deal with Inter expires.

Although Manchester United are looking to offload their player, it remains to be seen if they would be willing to do business with Manchester City.