Knowing there isn’t any real competition for Joao Cancelo (regardless of what the press tried to make everyone believe last week), Manchester City continue to take their time in their pursuit of the Juventus defender.

Gazzetta dello Sport provide the latest update on the situation on Tuesday, revealing the Cityzens have finally increased their offer, putting on the table €50m plus a handful of ‘easy bonuses’ that would take the whole affair up to €55m.

While it isn’t stated if Manchester City’s bid has been accepted, there’s also no countering from the Italian newspaper explaining they need to find a bit more to convince Juventus.

In fact, the only problem seemingly standing in between Cancelo and working with Pep Guardiola is Danilo, whom the Spaniard would like to offload before signing the new defender in order to avoid ‘panics in the squad’. 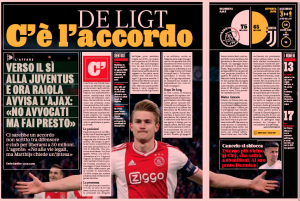 This appears to be slowly moving along its merry way and with one month left in the transfer window, there’s still plenty of time of getting it over the line i.e. finding Danilo a new club.