For Thierry Ambrose, leaving France to enter Manchester City’s academy was a big step, but it’s one that hasn’t completely paid off yet.

A mixture of injuries and strong competition in the first-team have limited his chances of making an appearance, and instead of staying with the reserves, loans were sorted out.

First came NAC Breda, then Lens in France’s Ligue 2, which was followed this season by a temporary spell at newly promoted Ligue 1 side Metz (who have an option to buy).

Making two very brief appearances from the bench so far, the player isn’t too bothered, knowing full well he’s trying to earn a spot in a team that already had strong bonds from a great 2018-19 campaign.

He told Républicain Lorrain: “It’s only the beginning. I can’t be frustrated. I know I’m a new player here. I need time. I’m going to bide my time and wait for my chance”.

Despite a lot of promise early on, a tough knee injury saw his development at Manchester City stall, which led to him pretty much starting from scratch as those around him progressed. 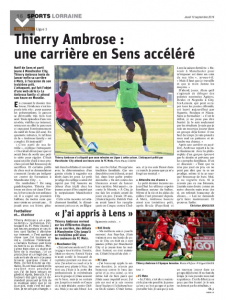 However, he hasn’t completely given up on making it under Pep Guardiola, either.

He added: “Coming back to Manchester City to establish myself there is in the back of my mind, but I need to work and give myself the means to do so”.

That will start with breaking through at Metz, and with a long and likely tough campaign ahead, he might just get that chance if those in front of him fail to perform.