Real Betis have played with three at the back and Quique Setién has used Junior Firpo as his first choice left wing-back this season. And he’s impressed, scoring three goals and registering one assist in the process.

Earlier in November, AS reported that there are many suitors for the 22-year-old, ‘especially Manchester City’.

His impressive form gets a mention in today’s edition of AS as they claim he’s ‘very followed’.

Once again, they mention the Premier League winners are following the player and it’s claimed Pep Guardiola’s scouts have been watched him in almost every match.

Junior was attracting interest from Arsenal in the summer, but he ended speculation surrounding his future by signing a new contract and with that he’s seen his buyout clause increase to €50m.

The Spain U21 international is managed by the City manager’s brother, Pere, and it’s stated Pep’s personal connection may improve his side’s chances of signing him.

However, any approach from the English champions or any other club for Junior will likely have to wait. 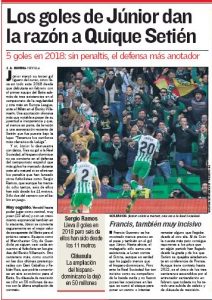 “Yes, I reaffirm it, my thoughts right now are in Betis, I am very happy in Seville, my girlfriend is pregnant, we are going to have our child here in Seville,” Marca quoted Junior as saying.

“I am close to my family, from my parents, from Malaga, which is where I grew up. Seville as a city, today in December with 18 or 20 degrees training, it’s marvellous …”

You don’t get that with Manchester winters.