Later this month, the Court of Arbitration for Sport (CAS) will confirm whether or not Manchester City will be allowed to play in the next season’s Champions League.

The Premier League side were handed a two-year ban from European competitions, and a €30m fine, by UEFA.

According to Het Belang van Limburg, insiders state there’s €220m at stake for the Citizens.

It’s also claimed the English club fear agents ‘will start listening’ to proposals from elsewhere, if their ban is upheld.

Kevin De Bruyne’s representative could be one among them as the 29-year-old doesn’t want to waste years of his career without featuring in European club competition. Apart from this, there’s a financial motivation to play in the Champions League.

The newspaper states the former Chelsea man’s contract at the Etihad will see him receive ‘at least €1.5m’, if City are in the Europe’s top tier competition. 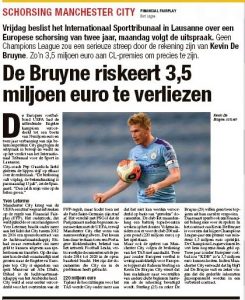 Two seasons without Champions League football could cost the Belgian around €3.5m.

If City’s ban is confirmed, HBVL add De Bruyne will ‘certainly ask’ for the money to be compensated though an ‘improved contract’, to continue at the club.

De Bruyne has been a key member of Pep Guardiola’s side for some time. He’s scored 13 goals and registered 20 assists in all competitions this season.