Home Europe Man City exit to be concluded next week – Club will get...
SHARE

The Pedro Porro saga should come to an end in the next week, according to reports from Portugal.

Loaned by Manchester City to Sporting in the summer of 2020, the fullback can be bought by the Lions for a price of €8.5m until the end of his spell, which runs until 2022.

It’s been a long time since the Lisbon side decided they’ll sign Porro permanently, but they had been leaving that action for later, especially because when they do agree the transfer, Manchester City will stop apaying 50% of his salary.

However, according to newspaper Record today, everything is agreed for the move to be done next week, as Sporting were convinced of triggering the clause sooner than expected. 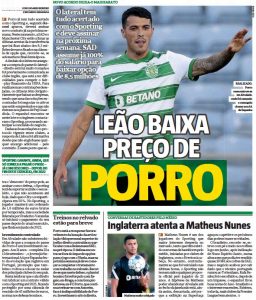 It’s Manchester City who contacted Sporting looking for this little help from the club who they have a good relationship with. The Citizens are said to be struggling with Financial Fair Play and selling players who’ve been on loan is one of the strategy to balance their accounts.

The Lions are accepting to make the signing now, but with a couple of conditions. First, they want a discount on the fee. And second, they will only start paying for the transfer after June 2022.

Everything is said to be agreed between Porro and Sporting, as the player is set to sign a four-year deal and should be protected with a release clause of €45m.