Home Europe Man City ‘evaluating’ signing of Brazilian forward, could be the start of...
SHARE

A few weeks ago, we covered claims from the Portuguese press saying Manchester City and Sporting were working on a partnership between the clubs.

This deal would mean the Premier League side would be sending a few players on loan to Lisbon, while the Lions could have their youngsters training in England for a while.

Now the Portuguese press comes up with the first player who could be involved in this deal, and it’s São Paulo forward Antony.

Newspaper Record claims that both Sporting and Manchester City are evaluating the possibility of signing him. They don’t give details of how the agreement would be done, although it sounds likely that Pep Guardiola’s side would buy him and loan him to the Lions. 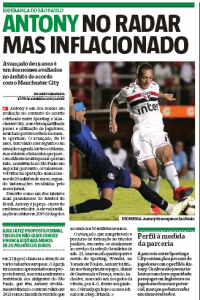 The problem, for now, would be the price. Antony is currently protected by a €50m release clause, and São Paulo are demanding at least €20m to let him go.

Antony has 25 appearances for São Paulo’s first team so far, and although he’s only scored two goals, his potential is clearly seen. The 19-year-old is currently playing the Toulon Tournament for Brazil.