Seemingly started by Tuttosport on Tuesday, the idea that Pep Guardiola could be interested in Paulo Dybala is starting to propagate in Italy.

In fact, the Manchester City manager has already kickstarted the process as he’s asked one of those closest to him, Ferran Soriano, to go and scout him.

Corriere dello Sport explain on Wednesday the CEO travelled to Lazio-Juventus back in late January to supervise the Argentine personally, and his presence there suggests Guardiola’s ‘great interest’ in Dybala, of whom he is a big fan.

However, that doesn’t mean he’s going to get his man, and the Italian newspaper make it clear any deal still needs to be ‘completely constructed’. 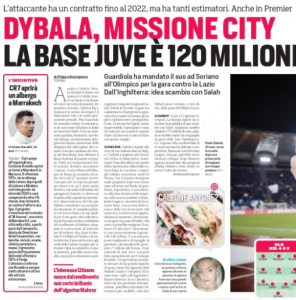 Contracted to Juventus until 2022, Dybala remains, despite his rather poor form of late, a key element in the Serie A champions’ squad, meaning we’re talking nine figures when it comes to a transfer fee.

Corriere reckon somewhere around €100-120m should be enough to convince Fabio Paratici and co. as well as an increase on his current €7m/year contract.

That’s a lot of money, but when has that ever stopped Manchester City in the past?