One of the recurring stories when it comes to Manchester City these days is their interest in Kalidou Koulibaly.

The defender appears to finally be heading for pastures new this summer after six years in the south of Italy, but only a select few clubs will be able to afford him.

Aurelio de Laurentiis, Napoli’s owner, is reportedly said to want around €100m for his star defender, but it’s widely believed the player would actually cost less than that.

That’s the opinion of a few reports from Italy over the past couple of days, starting with journalist Giovanni Armanini, who spoke to Calcio Napoli 24 Live about the Senegalese centre-back’s situation.

Relayed by Napoli Magazine, he said: “He’s in everyone’s notebook, and has made Manchester City’s because since yesterday it’s known they can play in the Champions League. His price? It would surprise me if a club was prepared to pay €80-90m: he can be worth €80m for sure, but we’re in an explorative phase of the market and other clubs are looking at other targets”.

He then goes on to state how City are looking at both Koulibaly and Dayot Upamecano for the centre-back role, further adding fuel to the speculation. 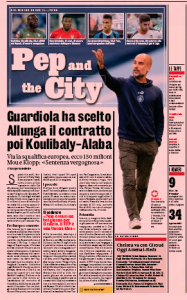 Over at Gazzetta dello Sport, the feeling is similar, as they point out Pep Guardiola is looking for two centre-backs, a winger and a striker.

For the experienced defender role, Koulibaly is the name mentioned, who could leave ‘in case of an enticing offer’, and while they point out De Laurentiis wants €100m, they believe somewhere between €75-80m ‘could find an agreement’, especially since he ‘could be seduced to play in the Champions League’.

You catch the general gist: Manchester City’s inclusion in next year’s elite European competition has reopened many doors that appeared close during their frustrating limbo, and the Napoli defender’s is one of them.