Matthijs de Ligt’s performances for Ajax across all competitions have seen him drawn attention from several clubs across Europe.

On May 15th, we carried a report from Mundo Deportivo, who explained that joining Manchester City could be one of the options for the centre-back in the summer.

Thursday’s edition of the same newspaper once again mentions the Premier League winners and also their local rivals Manchester United.

It’s claimed that Pep Guardiola’s side and United ‘continue to push’ for the Netherlands international’s signing.

The Catalan newspaper explains the 19-year-old’s ‘priority’ is to play for Barcelona, but after the latest Barca meeting in Amsterdam last week, the defender was not convinced with the sporting project and the economic offer made by the Blaugrana.

With interest from the Spanish champions, City and United, Bayern Munich and PSG, Mundo explains the competition to secure the Dutchman’s signature is ‘fierce’. 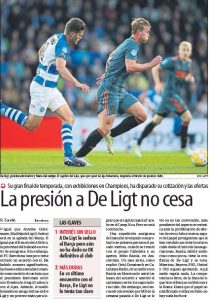 Manchester United’s poor defensive record could force them to look at strengthening their back four, while Manchester City will be in the market for a new centre-back as the future of Otamendi and Kompany are unclear.

A move to England has to be considered unlikely at this stage, this one is Barcelona’s to lose.