Ilaix Moriba has entered his final year of contract at Barcelona and the Catalan club’s efforts to tie him down to a new deal are yet to bear fruit.

The 18-year-old’s situation has attracted attention from Manchester City and Chelsea. The Premier League duo wanted to sign the midfielder before he last signed an extension in April 2019, and this was revealed by his father.

Mundo Deportivo now state the La Liga side offered a new contract to the player on Wednesday, but haven’t received a response from his camp.

Ronald Koeman’s side are ‘running out’ of patience and are finding it hard to understand the reason for the delay in getting a response.

The Spanish club wanted to offer a five-year contract, but Moriba’s representatives were asking only for three years, so that they can sit down again when Barcelona’s economic conditions improve. The latest renewal proposal will be the ‘final offer’ from the Camp Nou side.

Moriba was convinced with this proposal, but he’s still ‘sad and disappointed’ by the club’s decision to make him train with the reserves for not committing his long-term future to Barcelona.

According to the report, Barca have not set a deadline to find an outcome [renew or sell] in the Moriba case. 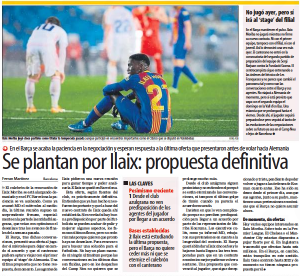 Regarding suitors, Mundo mention both Manchester City and Chelsea, and it’s said Pep Guardiola’s side and the Champions League winners ‘would be willing to push hard’ to sign him.

Barcelona, who are ‘calm’ about the whole situation, have so far not received proposals from City, Chelsea or any other club to secure Moriba’s signature.