Not so long ago, Manchester City were believed to be in driving seat to sign Barcelona’s Nélson Semedo and they were willing to include João Cancelo as a part of the operation.

The interest from the Premier League winners in the right-back is once again mentioned in today’s edition of Mundo Deportivo.

Therefore, City are in the market for a new fullback and are among the suitors for the Portugal international.

The Etihad club, however, face a problem in completing the Blaugrana defender’s signing because Barca’s idea is to use him in an exchange deal to sign Miralem Pjanić or Lautaro Martínez.

Semedo’s chances of ending up at Inter Milan remain remote, while Juventus are ‘firm’ on the 26-year-old. His agent Jorge Mendes is already ‘talking’ with the Serie A winners. 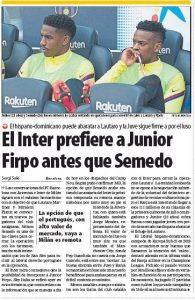 Mundo further adds there’s ‘good harmony’ between Quique Setién’s side and Juve to find a ‘beneficial agreement’ over exchange deals during the economic crisis.

This could push Semedo towards the Turin club rather than City and simultaneously, force Guardiola and his side to look elsewhere in the market for a new right-back.