Normally used to solving their problems by throwing a lot of money at them, there is one area where Paris Saint-Germain really struggle: retaining their talent.

With most areas of the first-team fully covered by international talent, the Ligue 1 champions have lost numerous youngsters to other clubs, with a list including Kingsley Coman, Adil Aouchiche, Dan-Axel Zagadou and Tanguy Kouassi growing by the year.

One who should stay, but could also be tempted away by the likes of Manchester City is El Chadaille Bitshiabu.

According to Le Parisien, Pep Guardiola’s side are one of many sides around Europe keeping an eye on the centre-back’s situation, alongside Real Madrid, Milan, Borussia Dortmund, RB Leipzig and Bayern Munich.

Nearly 6’5” at the age of 15, the youngster has caught the eye of the aforementioned elite list, and it’s said the worry at Paris Saint-Germain of losing him is ‘real’.

However, his father, Willy Bitshiabu, told Le Parisien there’s a preference to stay in France and that, for now, ‘negotiations are going well’ regarding his future contract with the Ligue 1 side. 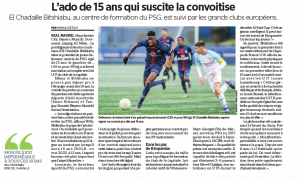 Nothing has been signed yet, but Leonardo is working on it, trying to fight off the interest from the ‘foreign clubs’, who have come forward to offer him a ‘five-year deal’ for him to sign when he turns 16.

It’s now up to him to choose, and we’ll have to see how convincing the Brazilian technical director can be, having already failed in keeping a promising centre-back once this summer, as Kouassi jetted off to Munich much to Thomas Tuchel’s frustration.

As for Manchester City, perhaps a phone call from Guardiola and Txiki Begiristain could turn things in their favour?

We’ll just have to wait and see.