Isco-gate, as we’ve named it just now, is causing waves around Europe, as the Real Madrid midfielder’s future is currently up in the air.

Relegated to the bench under Santiago Solari, the 26-year-old’s situation has caused a few transfer rumours to pop up, including that of a move to Manchester City.

A couple of days ago, we covered a story from El Chiringuito in Spain, who claimed Isco would accept an offer from the Cityzens if one was placed in front of him.

Knowing the source and their wild claims in the past, we took it with a pinch of salt, but the story has propagated and has now reached Italy.

The prospect of Isco leaving has allegedly caught the eye of Juventus, who are always up for a deal, but they are fully aware of the threat Manchester City represents. 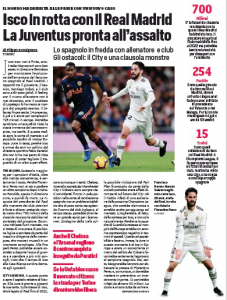 According to Corriere dello Sport, Pep Guardiola’s side are ‘always considered to be in pole position’ in the race to sign the 26-year-old, but there’s hope for Juventus yet.

That hope is the potential ban Manchester City are facing after recent FFP investigations, one that would see them be excluded from the Champions League.

Should such a move happen, then their stock would be reduced on the transfer market (according to Corriere) leaving a clearer path for Juventus to get Isco.

To us, that sounds like wishful thinking, as one year out of the competition shouldn’t harm the Premier League side too much, as their rivals showed when they signed Paul Pogba, Eric Bailly, Henrikh Mkhitaryan and Zlatan Ibrahimovic in their Europa League winning season.